BEST PLACES TO VISIT IN BALI AFTER TREKKING TOUR

As a Bali Trekking Organizer who arrange all Trekking in Bali, we also would like to take you to some Best to Visit in Bali after Trekking Tour or Before trekking tour during on the way, and Below are all info about Best Places to Visit in Bali island.  Below are a simple description of a Traditional Place to visit after come back from done the trek in Mount Batur, because normally we already finish the trek at around 9 am, so we still have enough time to explore more about Bali or visiting more interesting place in Bali.

Best Places to Visit in Bali

Celuk Village is the famous village in Bali as a tourist destination cause of the local residents is very proactive and full of innovation to the gold and silver crafting. This countryside is located in sub district of Sukawati, Gianyar Regency and owns the individuality and excellence in production of gold and silver crafting. Most of them are Balinese professional, artistic and skillful of design development related to the silver and gold crafting.

Mas Village is one of villages in Bali fundamentally identified as an artistic countryside by focusing in artistic of wood carving. Mas Village is located in Ubud sub district and Gianyar Regency, east part of Bali. It owns the typical style of wood carving art by placing forward the distinguish synergy the humanism and naturalism. The village’s popularity as an art village is famous in the national and world level which is not forgetting from the highness name of some maestros which has borne and found the spirit (taksu) and soul. The famous maestro who was borne in this village is Ida Bagus Tilem.

This Artistic countryside owns the long history root. The result of wood carving art in this village owns the immeasurable and wide dimension like idol for the devoting (arca idol), representative dimension of everyday Balinese social society life (farmer, fisherman, worker, intellectual, merchant etc), the abstract dimension as existing of actor imagination which is listening carefully of reality, dynamics and life philosophy. The villagers are same as villagers at other tourism countryside in Bali that have also experienced the transformation from agrarian society to the crafting society. Even nowadays, it is continued to service society from commerce service until levying service of the souvenir for overseas and domestic tourist.

Welcome to Gua Gajah (Elephant Cave) which is located in west side of Bedulucountryside, Blah Batuh Sub district and Gianyar Regency. It is about 27 km from Denpasar town. This cave is built at crevasse edge from the federation of 2 rills that is called Pangkung River , where the irrigation is mixed with Petanu River flow. The federation area of two rivers is called Campuhan/Mixture. It owns the magical energy on the basis of Rwabineda Concept/two different matters on this basic concept hence Gua Gajah (Elephant Cave) is intentionally built among two rivers.

Ubud Village is a traditional village supervising 13 Banjar (group of community) and 6 custom countryside. It is located in Ubud sub district, Gianyar Regency and about 20 km from Denpasar Town. Ubud Vilage can be reached within 30 minutes or 15 minutes from Gianyar Town and this place is situated in the high land about 300 meter above sea level. Ubud is surrounded by the good temperature compare with other regions in Bali where the temperatures are relative cool that is ideally for everyone to stay in this beautiful place. This village is occupied 9.800 peoples which most of them are Hindu. They able to keep the environment naturally so that way this place usually used by many tourist/people/actors to get the art inspiration.

Puri Saren Ubud (Ubud Palace) is an Ubud Kingdom Palace with beautiful Balinese traditional houses as a residence of Ubud King. It is set in the center of Ubud Baliwith traditional art market just in front of it and it is found by Ida Tjokorda Putu Kandel who has commanded from year 1800 – 1823. This palace is an artistic cultural life center, while the traditional market is the symbol of local economics resident. The existence of Puri Saren as a palace is equipped by a Wantilan/auditorium that is a large building of meeting room and a banyan tree as shelter place at the daytime. The traditional market is the place of society economics and its existence is always border on palace as artistic cultural life center. It means that the both pole meeting is describing the dynamics of society and kingdom life.

Places to Visit in Ubud

The tourists who purchase the tour package to Ubud will visit this place and they will feel not complete if they are not invited to visit the Puri Saren (Ubud Palace) and traditional market, because both of these tourist destinations are the soul and identity of Ubud Village itself. The palace is very beautiful with artistically traditional building and contains the high esthetics value. It is situated in the good temperature which can give the ruthless and freshness for every visitor. Some world class painters from Europe have lived in Ubud like Rudolf Bonnet, Walter Spies, Arie Smith, Antonio Blanko, Hans Snell and others. These entire world class painters through its painting masterpiece have indirectly followed to promote Bali Tourism because theme or their painting objects are about the culture and nature of Bali. Ida Tjokorda Agung Sukawati has exploited his palace as lodge place for his entire respectable guest.

In the year 1928, the Tjampuhan Hotel is founded for all empire’s guest and on 1934, this hotel is opened as a lodge for empire’s guest and also used as a center place of Pita Maha Organization Activities. Tjampuhan Hotel is an eldest hotel in Ubud with the traditional style. In growth hereinafter, Ubud as a tourism destination is one of tourist area in Gianyar Regency own separate specification.

Panting Museum is located about 200 meters from Puri Saren / Ubud Palace and it is dissociated by dell, climb a piece of wide plain with beautiful view. It is situated in calm and peaceful area of Ubud Bali so that this place is an ideal place for who wish to see and enjoy result of art from all big actor like I Gusti Nyoman Lempad, Ida Bagus Nyana, Anak Agung Gde Sobrat, I Gusti Made Deblog, Rudof Bonnet, Walter Spies and more.

This museum is opened in the year 1956 by minister of Education and Culture, Mr. Moh. Yamin. This museum is consisted of three special buildings in U-shape. In the middle of this museum is the courtyard and fishpond with the beautiful lotus flower. The building no 1 is a place for a permanent exhibition of puppets dressy or puppets style painting. This building is collecting the painting from I Gusti Nyoman Lempad and the clarification about the existence of Pita Maha Organization. The Building no. 2 is also a place for permanent exhibition or still from masterpiece result of all artist of Balinese modern dressy style. The Building no.3 is for a temporary exhibition.

Ubud Monkey Forest is a small rain forest dwelt by some group of monkeys and other tropical animals. It is strategically located in the hearth of Ubud Village, precisely located in the region of Padang Tegal Village, Ubud Sub district and Gianyar Regency. Monkey Forests in Balinese language called Wanara Wana are spread out in the island and Ubud Monkey Forest itself own very important function of the continuity the monkey habitat in Bali. Meanwhile the local community own important role to keep this forest naturally in order to all wild animals able to live smoothly. 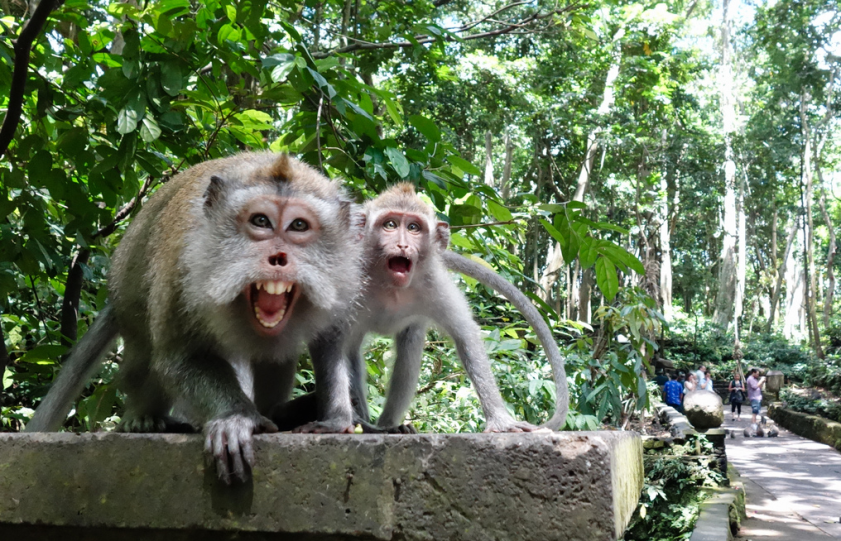 Tirta Empul Temple or Tampak Siring Temple is a holy spring water temple located in Tampak Siring Village, Gianyar regency and it is about 39 km eastwards from Denpasar town. It is set in the dale and encircled by the hill. In the west side of this temple, there is an Indonesian President palace which has been found by the first president. The name of Tirta Empul is loaded in a inscription which is kept at Sakenan Temple, Manukaya village, Sub district of Tampak Siring, about 3 km from Tirta Empul Temple. In this inscription, the Tirta Empul is named by the Tirta Ri Air Hampul and then the name has changed into Tirta Hampul and finally become the Tirta Empul. Tirta Ri air hampul is meaning the water emerge or the holy pool (Petirthan) which is the water emerge from the land.

Gunung Kawi is a Hindu Temple complex with old omission from the stone era located in Gianyar regency. Based on the inscription of Tengkulak A on 945 saka (Balinese calendar) which is released by Marakata King, the ancient omission complex is located at the Pekerisan River then it is called Katyangan Amarawati. Pekerisan River is also named by Jalu which is according to the inscription chiseled on the above of the biggest temple door sound ‘Haji Lumahing Jalu’. The name of Gunung Kawi is the name given on the omission which is related to the complex of temples because the temple on this area is like the symbol from the mount. There are 3 temples which so called the name as Gunung Kawi in Bali those are Gunung Kawi in Sebatu countryside, Gunung Kawi Temple in Keliki countryside and Gunung Kawi Temple in Babitra countryside. The ancient omission complex of Gunung Kawi is founded on 10 century. It is founded in the era of Udayana about 989 M. At the period of Marakata governance on 1023, the omission which is called Katyagan Amarawati is developed and continued by the governance of Anak Wungsu which is guess lead between the years of 1049 – 1077 M.

Batubulan is one of the Best Place to Visit in Bali

Batubulan is an artistic countryside in west part of Gianyar regency. The identity and image as an art village, Batubulan has been famous in Indonesia and all over the world which has been built based on an artistic blessing dance of Barong (Barong and Keris dance). Barong Dance is daily performed at five different stages in this countryside, like Puseh Temple Stage, Tegal Tamu Stage, Denjalan Stage, Sahadewa Stage and Sila Budaya Stage. The fascination of this Tourism Cultural Object is from variety of quality artistic potency. Batubulan Village is covering the dance art, artistic of Kerawitan, artistic of idol and article art. 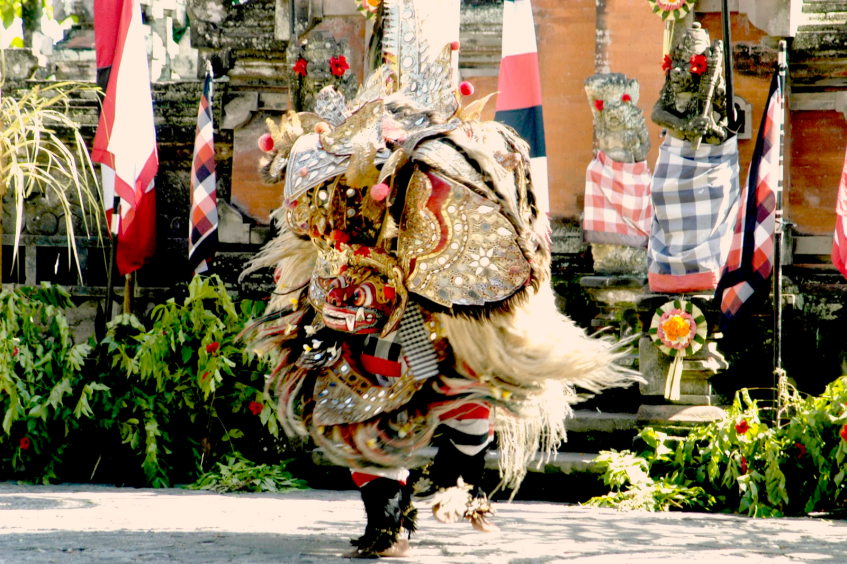