Tanah Lot Temple is one of the Amazing temple that we can visit after done of of our Trekking Tour if you would like to see Sunset From This temple. Our driver will be happy to take you to this place.

Tanah Lot Temple is located in coastal side of Tabanan Regency Bali. It is situated in 35 Km in west side of Guest area ( Kuta, And Legian ). The temple is built on the rock with 3 acre size and reachable in a few minute by walk, because it is just 20 meters from the coastal lip. This temple is very famous among tourist destinations in Bali with spectacular view of sunset. At some nooks of coral reef around Tanah Lot Temple there are holy tame snake in black and white color where according to the local society believe that it as a deity property and as the guard of the temple from the bad influence.

Tanah Lot is the name of a rock formation off Bali island, Indonesia. It is the location of the pilgrimage temple called “Pura Tanah Lot”(“pura” is a Balinese word that means temple. While “Tanah” means land). Tanah Lot is a well-known tourist and cultural icon for photography and exoticism. It is located in Tabanan regency, approximately 20 kilometres (12 mills) from Denpasar city. The temple itself is located exactly on a large offshore rock which has been shaped continuously over the years by the Indian ocean tide. Considering its location, the sunset panorama in Tanah Lot is very wonderful indeed. Thus, it is highly recommended to visit it during clear sunset time.

Tanah Lot is claimed to be the work of a Hindu priest of the 16th-century whose name is Dang Hyang Nirartha. During his journeys along the southern coast of Bali island he saw the wonderful setting of rock and rested there. Some fishermen saw him, and gave him some gifts. Nirartha then spent the night on the little island. Later he spoke to the fishermen and told them to build a shrine on the rock, because he felt it to be a holy place to worship the Balinese sea gods. The main deity of the temple is “Dewa Baruna” or “Bhatara Segara”, who is the sea god or sea power and these days, Nirartha is also worshipped here.

The Tanah Lot temple has been a part of Balinese mythology for many centuries. The temple is one of the seven sea temples around coastal areas of Bali island. Every sea temple was founded within eyesight of the next to form a chain along the south-western coast. The influence of Hinduism is very obviously seen in the temple. At the base of the rocky island, poisonous sea snakes are believed to guard the temple from evil spirits and intruders. The temple is believed to be protected by a giant snake, which was created from Nirartha’s “selendang” (“selendang” is a kind of sash) when he founded the temple in the rocky island.

In 1980, the temple and the rocky island were starting to fall into pieces and the area around and inside the temple started to be dangerous. Then the Japanese government gave a loan to the Indonesian government of IDR 800 billion (about US$130 million) to conserve the historical temple and other significant locations all over Bali. Therefore, over one third of Tanah Lot’s “rock” is actually cleverly disguised artificial rock created during the Japanese-funded and supervised renovation and stabilization program.

Nowadays the area leading to Tanah Lot is highly commercialized. To reach the temple from the parking area, visitors must walk through a set of Balinese souvenir shops which cover each side of the path that goes down to the sea. On a mainland of cliff tops, restaurants have also been provided for tourists. Not far from Tanah Lot temple, there is a temple called “Pura Batu Bolong”, another temple in Tanah Lot area, located within a short distance north of Tanah Lot temple. 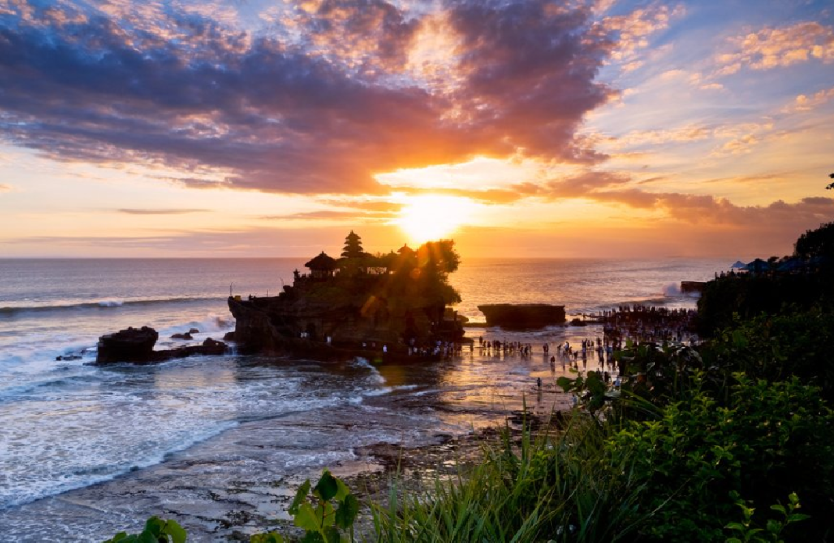 The unique animal can be seen in this temple area is the snake which are generally can be met in the coast. Part of its stomach there are no athwart skin, there is only small skin, but this sea water snake very noxious but snakebite case are very seldom happened, because the sea water snake generally very passive.

What to See in Tanah Lot ? the main point is see the sunset with wondefull temple back groud.

As a favorite tourism destination in Bali, Tanah Lot owns a magnificent view in particular at the sunset time where the sun slows down to the earth stomach. Every visitor who is paying a visit to this place will be marveled to see the beauty panorama of Tanah Lot. Beside of this temple, there are other temples which can be seen on your visit to Tanah Lot like Batu Bolong Temple, Batumejan Temple and Enjung Galuh Temple. SO Again, if you interest to visit This temple after done the trek for example after we done trek in Batur village, we still have enough time if you would like visit this temple, please just advise us in adance.